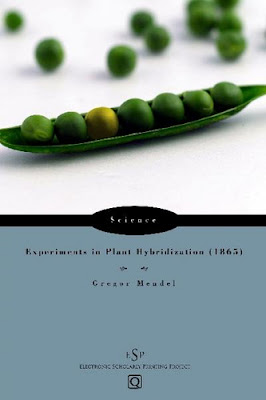 Definition: The principles that govern heredity were discovered by a monk named Gregor Mendel in the 1860's. One of these principles, now called Mendel's law of segregation, states that allele pairs separate or segregate during gamete formation, and randomly unite at fertilization.

There are four main concepts related to this principle. They are as follows:

1. A gene can exist in more than one form.

3. When gametes are produced (by meiosis), allele pairs separate leaving each cell with a single allele for each trait.

4. When the two alleles of a pair are different, one is dominant and the other is recessive.

Mendel discovered that when crossing white flower and purple flower plants, the result is not a blend. Rather than being a mix of the two, the offspring was purple flowered. He then conceived the idea of heredity units, which he called "factors", one of which is a recessive characteristic and the other dominant. Mendel said that factors, later called genes, normally occur in pairs in ordinary body cells, yet segregate during the formation of sex cells. Each member of the pair becomes part of the separate sex cell. The dominant gene, such as the purple flower in Mendel's plants, will hide the recessive gene, the white flower. After Mendel self-fertilized the F1 generation and obtained the 3:1 ratio, he correctly theorized that genes can be paired in three different ways for each trait: AA, aa, and Aa. The capital "A" represents the dominant factor and lowercase "a" represents the recessive. (The last combination listed above, Aa, will occur roughly twice as often as each of the other two, as it can be made in two different ways, Aa or aA.)

Mendel stated that each individual has two factors for each trait, one from each parent. The two factors may or may not contain the same information. If the two factors are identical, the individual is called homozygous for the trait. If the two factors have different information, the individual is called heterozygous. The alternative forms of a factor are called alleles. The genotype of an individual is made up of the many alleles it possesses. An individual's physical appearance, or phenotype, is determined by its alleles as well as by its environment. An individual possesses two alleles for each trait; one allele is given by the female parent and the other by the male parent. They are passed on when an individual matures and produces gametes: egg and sperm. When gametes form, the paired alleles separate randomly so that each gamete receives a copy of one of the two alleles. The presence of an allele doesn't promise that the trait will be expressed in the individual that possesses it. In heterozygous individuals the only allele that is expressed is the dominant. The recessive allele is present but its expression is hidden.

Mendel summarized his findings in two laws; the Law of Segregation and the Law of Independent Assortment.

Law of Segregation (The "First Law")

1. The Law of Segregation states that when any individual produces gametes, the copies of a gene separate so that each gamete receives only one copy. A gamete will receive one allele or the other. The direct proof of this was later found following the observation of meiosis by two independent scientists, the German botanist, Oscar Hertwig in 1876, and the Belgian zoologist, Edouard Van Beneden in 1883. In meiosis the paternal and maternal chromosomes get separated and the alleles with the traits of a character are segregated into two different gametes.

2. The two coexisting alleles of an individual for each trait segregate (separate) during gamete formation so that each gamete gets only one of the two alleles. Alleles again unite at random fertilization of gametes.

The Law of Independent Assortment, also known as "Inheritance Law" states that alleles of different genes assort independently of one another during gamete formation. While Mendel's experiments with mixing one trait always resulted in a 3:1 ratio (Fig. 1) between dominant and recessive phenotypes, his experiments with mixing two traits (dihybrid cross) showed 9:3:3:1 ratios (Fig. 2). But the 9:3:3:1 table shows that each of the two genes are independently inherited with a 3:1 phenotypic ratio. Mendel concluded that different traits are inherited independently of each other, so that there is no relation, for example, between a cat's color and tail length. This is actually only true for genes that are not linked to each other.

Independent assortment occurs during meiosis I in eukaryotic organisms, specifically metaphase I of meiosis, to produce a gamete with a mixture of the organism's maternal and paternal chromosomes. Along with chromosomal crossover, this process aids in increasing genetic diversity by producing novel genetic combinations.

Of the 46 chromosomes in a normal diploid human cell, half are maternally-derived (from the mother's egg) and half are paternally-derived (from the father's sperm). This occurs as sexual reproduction involves the fusion of two haploid gametes (the egg and sperm) to produce a new organism having the full complement of chromosomes. During gametogenesis—the production of new gametes by an adult—the normal complement of 46 chromosomes needs to be halved to 23 to ensure that the resulting haploid gamete can join with another gamete to produce a diploid organism. An error in the number of chromosomes, such as those caused by a diploid gamete joining with a haploid gamete, is termed aneuploidy. 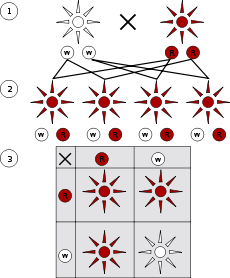 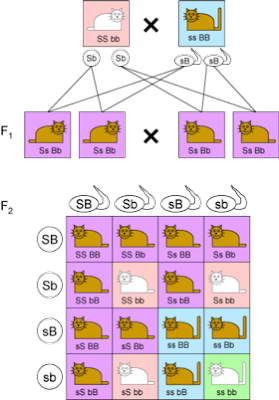 Figure 2: The phenotypes of two independent traits show a 9:3:3:1 ratio in the F2 generation. In this example, coat color is indicated by B (brown, dominant) or b(white) while tail length is indicated by S (short, dominant) or s (long). When parents are homozygous for each trait ('SSbb and ssBB), their children in the F1generation are heterozygous at both loci and only show the dominant phenotypes. If the children mate with each other, in the F2 generation all combination of coat color and tail length occur: 9 are brown/short (purple boxes), 3 are white/short (pink boxes), 3 are brown/long (blue boxes) and 1 is white/long (green box). 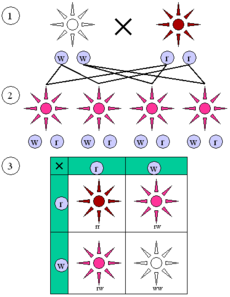 Figure 3: The color alleles of Mirabilis jalapa are not dominant or recessive.
(1) Parental generation. (2) F1 generation. (3) F2 generation. The "red" and "white" allele together make a "pink" phenotype, resulting in a 1:2:1 ratio of red:pink:white in the F2generation.
References:
http://biology.about.com/od/geneticsglossary/g/law_of_segregation.htm
http://en.wikipedia.org/wiki/Mendelian_inheritance
Oleh airmien at 10:03:00 PM