Dikir Barat is a form of singing. The origins of Dikir Barat is debatable, but most would accept it to be from Southern Thailand or Northern Peninsula Malaysia. In an agricultural society, the dikir barat was performed as a ritual or celebration of the rice harvest season. Today, dikir barat performances are mainly for entertainment but competitions between Dikir Barat groups are also held. Currently, Singapore and two states of Malaysia which are Kelantan and Terengganu are perhaps places where Dikir Barat is still performed actively on many levels.

Dikir Barat was known to have been brought down from Southern Thailand. The Malaysians called it "Dikir" which has the same sound as the malay word "zikir" which means prayers or rituals, something the Northern Malaysians see the Thais doing every rice harvest season. "Barat" means west, which is where the Northern Malaysians then view the geographical location of Thailand. Geographically, however, Thailand is to the north of Malaysia. However, as the name has been ingrained, it was never changed.

Dikir Barat was then brought further down south to Singapore in the 1970's. Various competitions are organised by governing bodies each year and the turnout for each competition is good till this very day, despite Singapore being a metropolitan and modern city.


According to historical sources, Dikir Barat is based on a dance called "Tarian Patung Inai" that was very popular among Siam and Kelantan Society around 1800 to 1940. Then Pak Leh Tapang (Hj. Salleh) changes it to Dikir Barat.

Dikir Barat is also connected with "Dikir Laba" or better known as "Dikir Punjab". "Dikir Punjab" is a play in the Punjab language (Hindustan) or in the Arabic language and has a very close connection with "Qawwali". "Qawwali" is a very popular culture among Indian. In Dikir Laba, the members of the group will sing a song and try to follow the rhythms by moving their body. They must raise their voice very high.

No matter what kind the dikir it is, Tok Jogho has a very big responsibility to make the song alive.

In year 1948, Pak Leh Tapang changed the way Patung Inai is played by adopting some of the elements from Dikir Laba and Dikir Punjab. The word "Barat (west)" is derived from the nickname given by the Kelantanese to the Siamese society. Although there are some who theorise that "Barat" comes from the word "Bharat" the old name given to the Indian sub-continent. This makes sense when taken in context of "Dikir Punjab".

[edit] The Composition of a Dikir Barat Group

The basic elements of a Dikir Barat Group are the two frontmen, the Juara and the Tukang Karut. A Dikir Barat group can be of any size.

In Singapore, during competitions, the standard size of a group will be the two frontmen, fourteen awok-awoks and four percussion players.

The Juara is the singer of the group and he will usually open the performance of his or her group followed by the Tukang Karut. Unlike the Juara, the Tukang Karut will be interacting with the audience with his or her wit. The more engaging a Tukang Karut is the more effective he or she is as a performer. The Juara would be one with the melodious voice.

The awok-awoks are basically the chorus. They will sing and do dance moves, while sitting down in tune with the songs being sung by the two frontmen.

The percussion includes an ibu rebana, an anak rebana, a maracas, a tambourine, gong and canang. The ibu or 'mother' rebana is the main and most important percussion. The anak or 'child' rebana supports the ibu rebana and is significantly smaller in size with a higher pitch to it. The canang is a small traditional malay gong that is set on the floor, and sets the tempo along with the gong. Maracas and tambourines are usually used for extra effects to the music. A tambourine is usually played by one of the frontmen when the other is singing.

p/s: proud to be Kelantanese


Below: A few of the pictures that may related with the topic, Dikir Barat 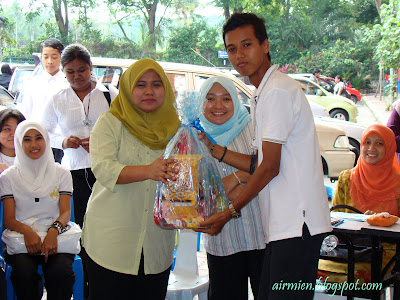 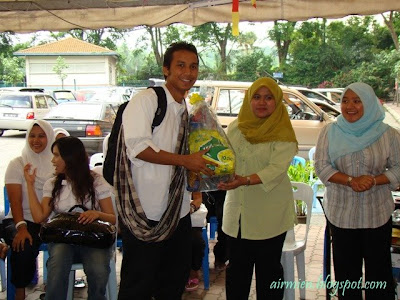 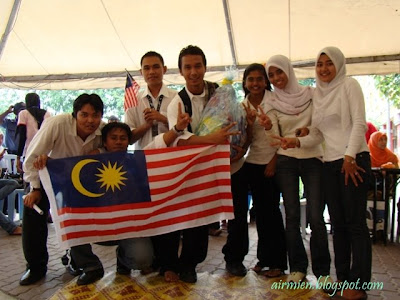 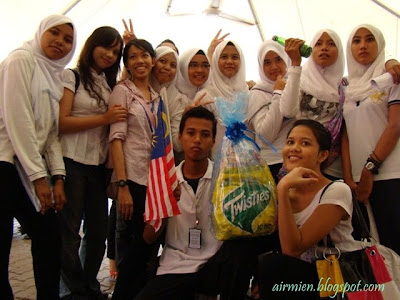 The show was performed by a few group of student during their orientation week, aug 2008
Oleh airmien at 8:07:00 PM